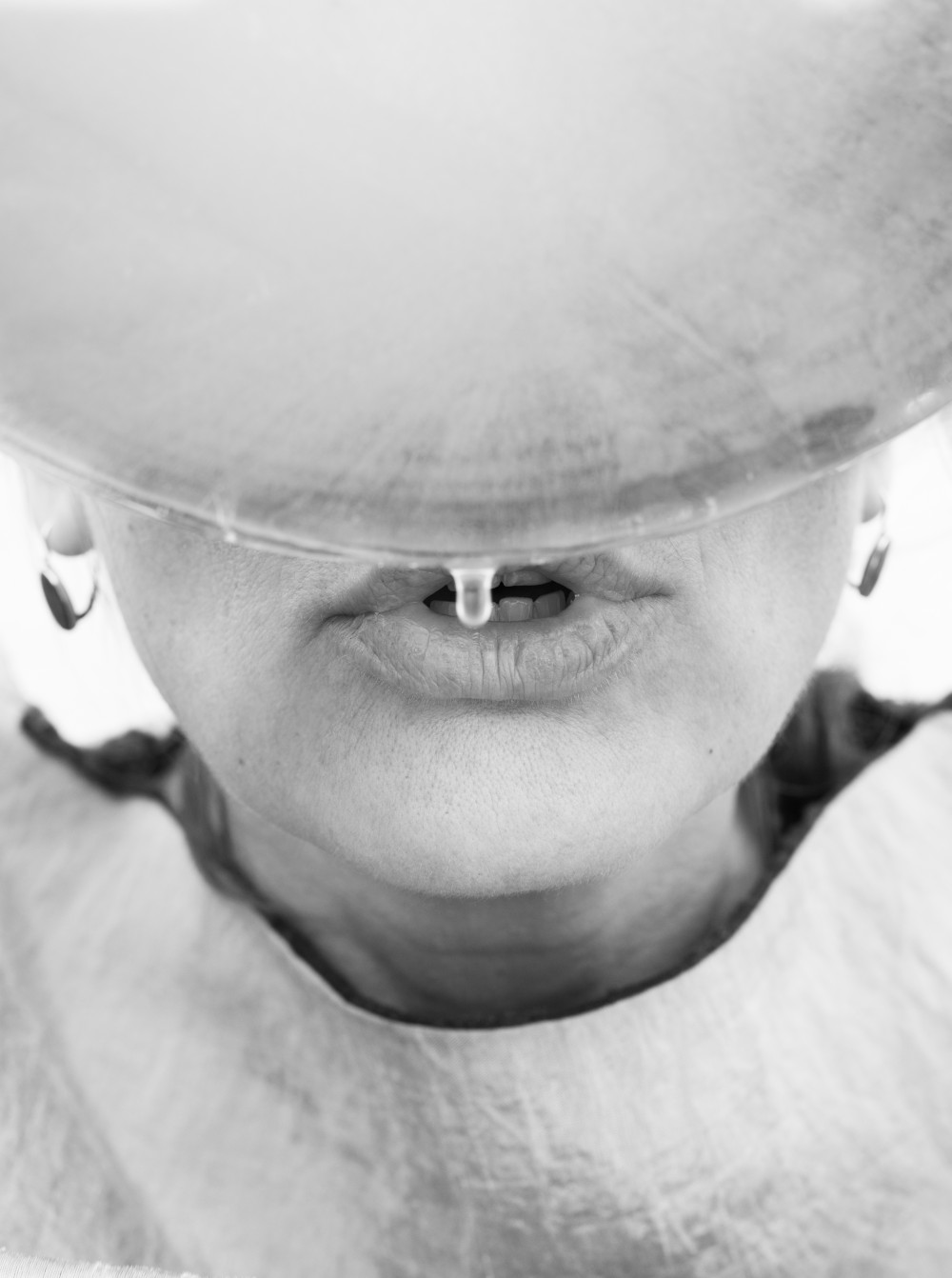 The ISING project is a three part multimedia project. Moving between the concert hall, the polar ice cap, and the gallery, the cycle employs sound, sculpture, video, and photography to convey the power and responsibility of every human to shape our world. This project shines a light on how our existence - our breath innervates the national geography in both a beautiful and terrifying way.

The project’s name derives from the scientific term used in statistical mechanics. Ising is when a model that tries to imitate the manner in which individual elements modify their behavior so as to conform to the behavior of other individuals in their vicinity. It can be applied in many other scientific fields where the individual elements can be atoms, protein folds, a biological membrane, groups of animals, social behavior, etc.

Reimagining The Concert Hall As A Space Of Change - To Raise Awareness On Individual Responsibility?

The first component of the tryptic is a multi continent concert tour. Ahead of the tour, Pangalou will disintergrate the Ising project as a whole, into its content as well as in its structure to local climate change activists, NGOs, and new music ensembles. In addition she will develop partnerships with foundations and liaise with local hubs of artists in order to raise awareness and individual responsibility.

Pangalou will then present a performance with an open score as a preparation for the in situ performance. All the elements of the performance i.e. Environment, human voice and ice will be presented. A video projection with the addition of photographs from the area, recordings from the land and sea of the Arctic environment, a recorded melting process of a piece of ice plus the human voice creating a vocal environment will be presented. All the elements are in attendance but not interacting until the actual Arctic performances.

How A Human Song Can Sculpt An Iceberg

The second component of the cycle is a 21-day performance piece at one of the Earth’s polar ice caps. During this performance, Pangalou will retrieve a detached piece of ice from a local iceberg and place it on a platform. For the next 21 days (the time an egg needs to form into a new life), Pangalou will sing to the ice - a body of water in a different form.  The artist intends to formulate a sculpture with the warmth of the exhalation created by singing. As she sings, the C02 she produces, the very element that brought life back at the beginning of creation, will be funneled through a pipe with detachable endings of different forms. This gas will begin to shape and sculpt the detached piece of the iceberg into a new form. Existing / breathing for beauty versus existing / breathing for  distraction as humans have in the last decades. A specially designed garment will be worn. In the process the artist aims to transform into a new clarified and conscious individual. Can the human body sing in these harsh conditions? Can a sculpture be created in the Arctic by singing? The evolution of the ice will be captured via still photographs and videos. Contact mics and other monitoring apparati both on ice and on Pangalou’s body will record and project the sounds she is singing and the vibrations her pharynx is producing. In the daily performances the sounds of the ice, of the human body and of the environment combined with the landscape of the Arctic will create an introspection on the dialogue between two different forms of water. Past, present and future unite in a single moment, the space of unification / the sound of creation and, as the C02 hits the ice, transformation.

The Songs Of 2 Bodies Of Water

The third component of the Ising tryptic will be a second multi continent concert tour in which Pangalou will stand in front of the video and still image documentation and present a music performance. The performance will be formed by her live voice and electronic new music compositions generated from both the sounds made to sculpt the ice as well as music inspired by the data she gathered from various biometric sensors which captured her body’s struggle in the harsh environment. Can the performance aid the liquefaction of humans/the spectators, who often look as if they have turned into iced creatures that do not communicate with their environment? The installation with the video and still documentation together with the electronic composition, can be exhibited as autonomous artistic piece that can travel to venues that are unable to host a full performance.

Three involved subjects : Environment, iceberg and human. On every moment all are present and we have the presence of each one individually and their relationships/interactions. The environment encompass everything and directs the condition. The human is represented by the voice and the breath. The ice reacts/responds. The performance consists of different vocal actions and their influence in the state of the iceberg. The environment controls directly or indirectly the actual performance. The performer attempts to imitate nature in her manner of operation. The parameters of the human performance have been catalogued, analysed and quantised. Chance operations depending on the environment are used to provide details for the values of each parameter. The performer attempts to construct coherent sonic events from the combination of these parameters. These sonic events are projected at the ice. The reaction of the ice is monitored. An open score has been especially prepared in order to provide form and coordination for the human performance. The score reflects the place, the time and the conditions of the environment. A light technological system connects, monitors and documents the situations. 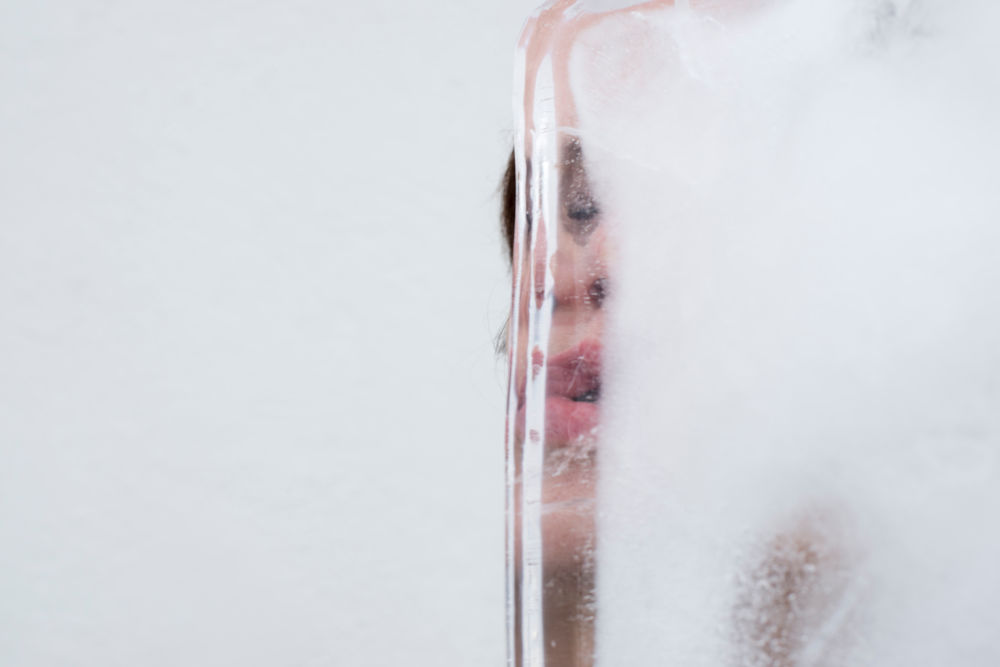 The first part of the performance is the preparation of the actual in situ performance. In this part  visual, sonic, meteorological and geographical data from the Arctic is used. The various aspects of the human performance are scientifically measured and presented. There is an experimentation on the sonic behavior of a piece of ice. Each performance of this part depends on the place, time and condition of the environment in order to fine tune their associations with the relevant parameters

In the last part of the triptych, the documentation, the collected material and the completed scores from the 21 days performances will be exhibited in a multimedia environment where further performances can be implemented, as exhibitions, performances, concerts etc. The composition will include live vocals in dialogue with the electronic composition. All the music elements that have been used to the two previous components of the triptych will be fragmented and recombined , thus creating an ever-changing discourse between the various occurrences of the Ising performances. 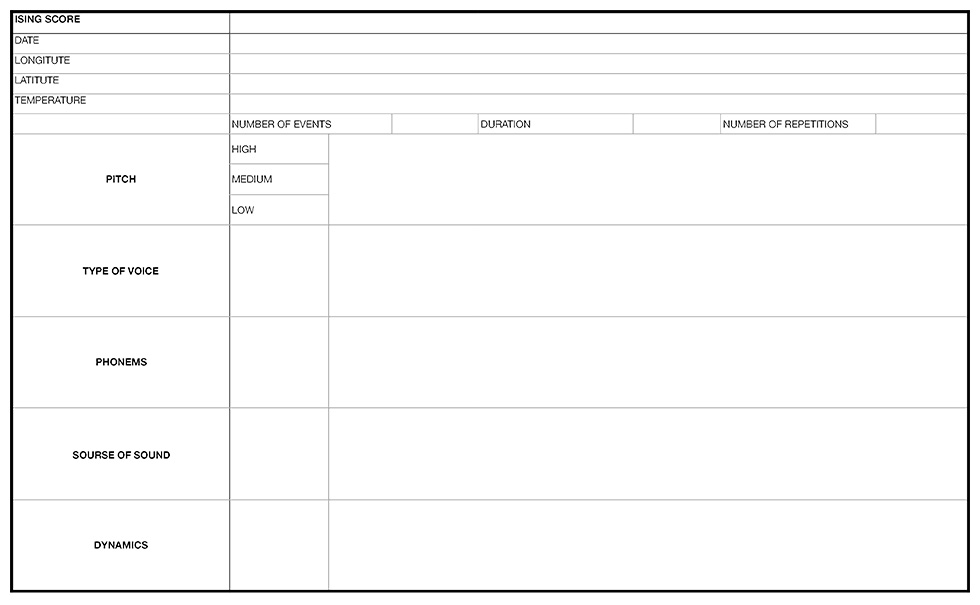 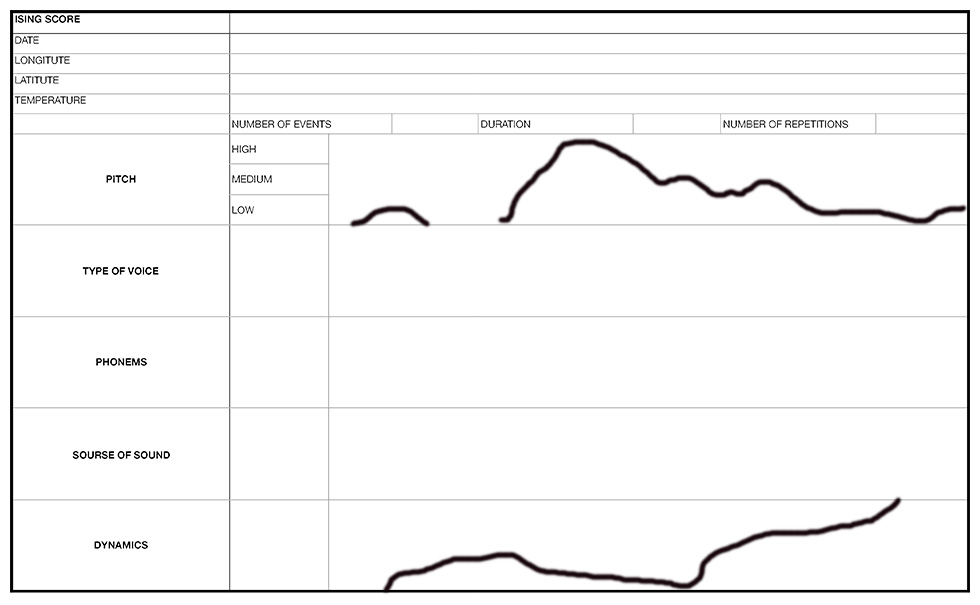 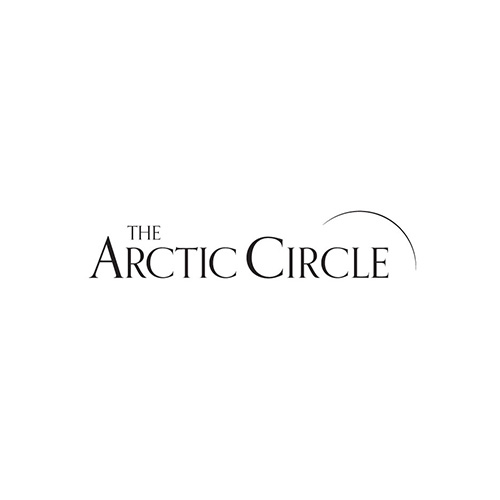 For the realization of the 2nd part of the Ising Project, How A Human Song Can Sculpt An Iceberg Pangalou will be located in Svalbard, Norway.

June 7 - June 25th
The Ising Project will be part of the ARCTIC CIRCLE 2020 expeditionary residency program at the Summer Solstice Expedition in June 7 - June 25th. Along with International artists, scientists, educators and innovators we will live and work aboard a Barquentine Tall Ship while sailing the waters of the international territory of Svalbard, an Arctic archipelago just 10 degrees latitude from the North Pole.

The Ising Project will continue and conclude the 21 days performances in the Island of Svalbard. 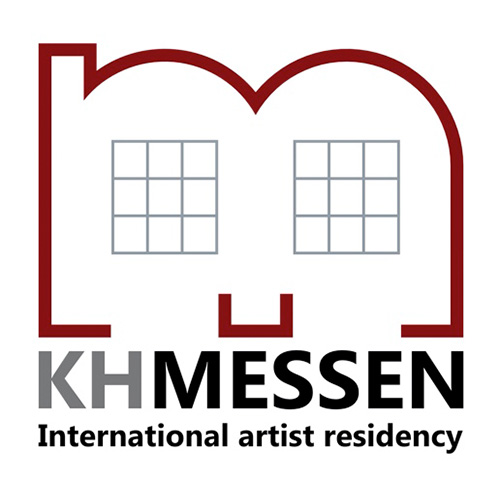 After the 21 performances in the Arctic, the Ising Project will be part of the KUNSTNARHUSET MESSEN, ÅLVIK, Norway in the heart of the Hardangerfjord. In the period of July and August, in the secession of the Norwegian fjords, Pangalou will focus on the selected material and will select the material that will be used for the 3rd part of the Ising Project, The Songs Of 2 Bodies Of Water. 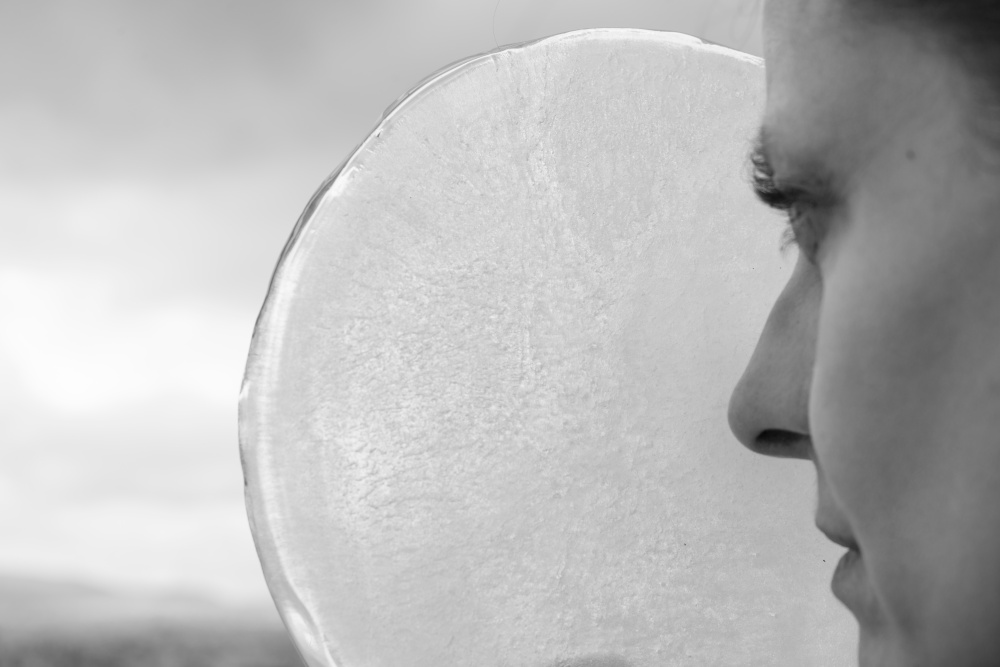 Upcoming Performances of the Ising Project

The Ising Arise of Awareness 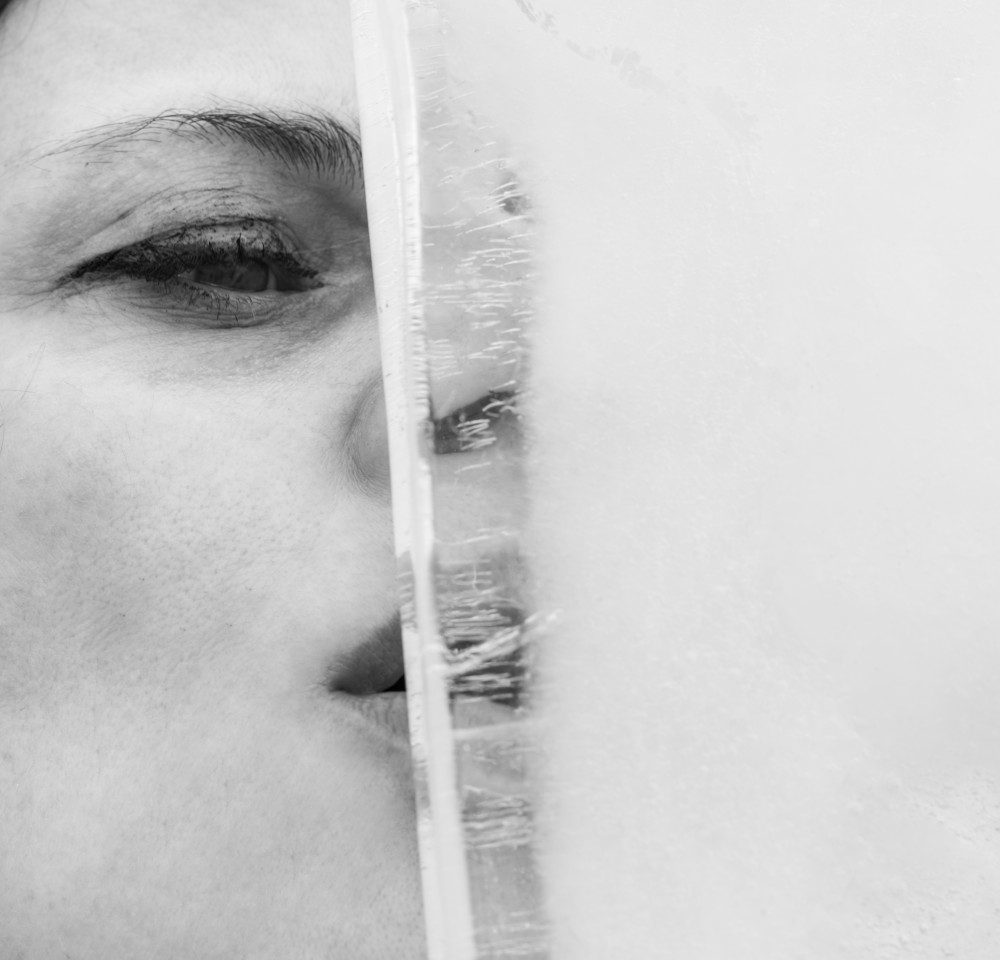 Anna Pangalou is a voice soloist who explores the boundaries of classical vocal practices and the new forms created by experimental sound practices.

She has studied classical singing in Cannes, Vienna, Rome, and Athens. Prizes and scholarships include the Alexandros Onassis Foundation, the Fulbright Foundation and the International 'Dimitri Mitropoulos' Singing competition as part of the project 'Opera of the World' by Cultural Olympiad 2004.

She has appeared as a soloist in Greece, Austria, Germany, Italy, France, Egypt, Turkey and the United States, performing Opera, Lied, Oratorio, New Musical Theatre, and Contemporary Music. She specialises in avant-garde contemporary music. She is a permanent collaborator of the program 'Open Days' - all-day retrospectives of avant-garde contemporary composers held by the Onassis Cultural Centre - where she has performed, among other works, emblematic compositions of the contemporary voice repertoire. Her performances are characterised by intense theatricality. Contemporary composers have written works for her voice and dedicated them to her.

The use of voice in unconventional ways and the abstraction of meaning in music composition, graphic and text scores, from Dadaism until our days, is the main focus of her work in the past six years. Her active collaborations with artists from different fields (dance, fine arts, theatre) aim to create novel forms of expression.

She has collaborated with the Benaki Museum of Athens (2010 - 2015), where she has inspired, curated and performed events in the art exhibitions of the museum. As a Fulbright Artist in 2016, she was an invited artist in Residence at CalArts, where she delivered a number of performances and taught a stand-alone course on her teaching method “Silent Singing” during the Spring semester at the Voice department. Further, in 2018 she was an invited tutor at the Master program “Roaming Academy” of the Dutch Art Institute (DAI). Anna Pangalou has also participated in Documenta 14 (Athens), where she premiered the composition of Alvin Lucier 'So You (Hermes, Orpheus, Eurydice)’ in June 2017.